Our MAGS:BTS feature is on Zack! An entrepreneur since elementary school, Zack has kept the hustle alive and is now pursuing his dreams.

My name is Zack Honarvar and I just turned 25 years old. I recently quit my job at home in Toronto, Canada and took a 1 way flight to Los Angeles to start my own talent management company, working with Yes Theory. 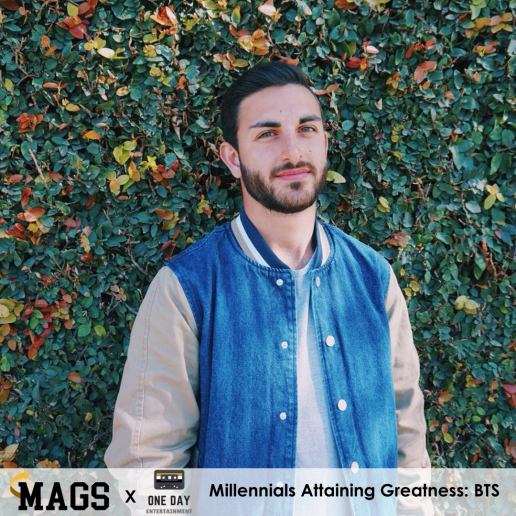 As far back as I can remember I’ve always been an entrepreneur. In elementary school I used to go to Costco with my mom and get bulk candy bars and then go to school and sell them to friends at recess. I’d use the money I made to buy my favorite CDs at HMV or to buy basketball cards I wanted to collect.

For university I attended Wilfrid Laurier University in Waterloo, ON. I was an economics major but spent all my time imagining what businesses I could start once I graduated. Throughout university I always had a side hustle because I wanted to learn what it took to start a business and develop my entrepreneurial skills, while I patiently waited for my “big idea”.

In university, I started a tutoring business called EZA (easy-A) that I ran out of the basement of a church near campus. I hired tutors and payed them to lead a 2-3 hour crash course on a business class before big midterms and exams. I charged students $20 to enter and I marketed the sessions by standing outside lecture rooms when class ended handing out flyers just before exam season was about to hit.

One of my proudest entrepreneurial moment was later in university when I fund raised money to buy a MacBook Air by selling space on it’s front cover as ad space to local brands and restaurants. I had them buy square inches on my laptop to laser-etch their logo onto so that it could serve as a billboard when I had my laptop out during lectures.

All of these entrepreneurial ventures ultimately led me to Yes Theory. Yes Theory is a YouTube group that has recently zoomed past 1.4 million subscribers on YouTube. The previously sold a show to Snapchat as a 4 part original series on their discover page and even recently announced a collaboration with Will Smith.

They live in Venice, CA and have been friends of mine for the past year, well before we ever considered working together professionally.

Favourite Thing About Being an Entrepreneur…

My favorite thing about being an entrepreneur is being fully responsible for every outcome that occurs in my life. When you’re in school and you suck at it, you blame the teacher. If your at a job that you’re under performing at, you blame your crappy boss. But when you’re an entrepreneur, there’s no one else to blame and it’s an intimidating feeling that gives me an unmatched adrenaline to work hard everyday.

Challenges of Being an Entrepreneur and Overcoming it…

Before I quit my job at Shopify, I was extremely comfortable. I was one of the top sales reps on the team, making very good money, and was spoiled by all the perks that came from working at one of the top start ups in the world. Free food, free house cleaning, lifestyle account spending, self development budgets, and much much more had shackled me with golden handcuffs.

My biggest challenge as a natural entrepreneur was that I was comfortable and had no reason to take a giant risk to start something on my own. How I got out of it? – I had a very particular moment when a friend asked me what my passion was and what I wanted to become in life. When I realized I wasn’t doing what I was passionate about, I realized that things had to change and I quit my job a week later.

Advice to Millennials Looking to Attain Greatness as Entrepreneurs…

You may think I’m being negative, but I know the real entrepreneurs won’t listen to me. They’ll read this fuming. Eager to prove me wrong and get theirs. The others that listen, I will have saved them the wasted effort of even trying in the first place.

Yes Theory is collaborating with Will Smith to create the largest social media event for charity in history and I’m lucky enough to be apart of it. Executing on the ideas of some of the greatest minds of our generation. It’s insane. They will not only be jumping out of a helicopter together in September but stay tuned for lots of other collaborative content in the meantime!

Find out more about Zack, check out https://zackhonarvar.com/